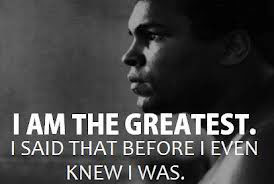 ” I AM THE GREATEST. I said that even before I knew I was” Muhammad Ali

Often called `the father of psychology’, William James taught us the `Act as if ‘ principle.

He stated, “If you want a quality, act as if you already have it”.

You’ve no doubt heard these three words before, maybe even took a crack at applying this strategy in your life.

But have you ever really taken the time to ask, “what exactly does it mean to “act as if?”

Just what it says!

Act as if you already possess a behavioral characteristic, an outcome, or an ideal. Inhabit the outcome in advance, see it, smell it, taste and affirm it as if the outcome is already reality.

Muhammad Ali provides us with the perfect example of this philosophy with this inspiring quote; “To be a great champion, you must believe you are the best. If you’re not, pretend you are.” 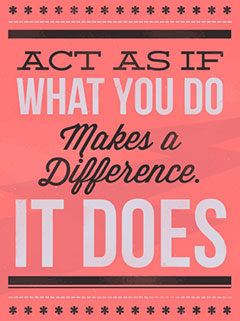 Every outcome, every result you want to manifest consists of a mental equivalent.

Huh? It’s actually very simple, before a goal or outcome is achieved, a mental process, a belief system was first initiated.

A “construct” in its simplest form is a concept or “model”. This in itself is not very interesting until we realize that just about everything ever made outside of nature began as an idea in someone’s head.

Some of these ideas or “Constructs” have had more impact than others over time. Of those that have had impact, some have been for the good of mankind and some have not.

The “Act As If” philosophy is a powerful mental construct which allows you to assume the correct mental position or posturing IN ADVANCE.

This is one of the 100 lessons you will learn once you begin the 100 Day Challenge.

Don’t Quit
Are You Remarkable or Irrelevant?