By Gary Ryan Blair in Rants and Raves 0 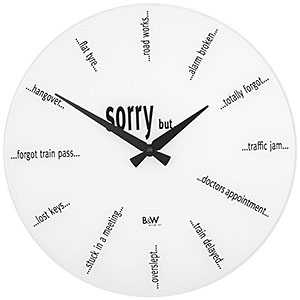 Excuses are a dramatic, ongoing theme for Knuckleheads.

One thing you can count on from far too many people is their consistency in being late for just about any meeting. They are an equal opportunity offender and THIEF of others time, and patience.

These knuckleheads are not the sharpest knives in the drawer; they waltz in late, apologize profusely and insist that this incident was highly unusual.

They are never, ever late they say. The victim of their excuse finds the knucklehead amusing because experience has shown them to be late for everything.

Let?s cut to the quick on this issue. Being chronically late is irresponsible, unprofessional, and is a significant factor in annoying those that have been on time.

Knuckleheads would never admit this but they are getting some kind of demented jolly by getting other?s attention when they walk in the room ? late of course.

This demented behavior reinforces a sense of inadequacy that the Knucklehead feels about themselves and this is their creative way of demonstrating their incompetence to the world.

Excuses are a dramatic, ongoing theme for Knuckleheads. They consistently over schedule, become flustered when they fall behind, and continue to insist that they are never late. A rendezvous with reality is the only hope for change!

Granting Wishes to Strangers
The Fine Art of Gratitude