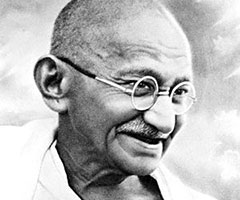 On January 30, 1948 Mohandas Karamchand Gandhi (Mahatma Gandhi) was shot three times at point-blank range by a Hindu assassin as he walked through a garden in New Delhi to take evening prayers. He died instantly.

Today he is remembered as an anti colonialist, an advocate of nonviolence, a pioneer of civil disobedience, and the father of the world’s largest democracy.

Believers in his vision used Gandhi’s tactics during America’s civil rights movement, to end apartheid in South Africa, and, at Tiananmen Square in 1989, to challenge China’s autocratic government.

He achieved a great deal as a political leader, working against discrimination, poverty, and the caste system. He expanded women’s rights, religious tolerance, and economic self-reliance.

For all these things he is rightly honored. But in the long run, Mahatma (literally “Great Soul”) may be best remembered for his contribution to humanity’s inner life.

Gandhi advocated a simple, humble and unassuming lifestyle. He had lived modestly, wore traditional Indian dhoti and shawl, and ate plain vegetarian food. He said it does not require money to be neat, clean, and dignified.

He suffered many hardships and was imprisoned several times and for many years in both South Africa, where he employed nonviolent disobedience, and again in India.

It was during these periods that he took the time to write down his key principles. Here are a few of my favorites:


More than 60 years after his death, Gandhi is still viewed as one of the world’s great spiritual leaders. 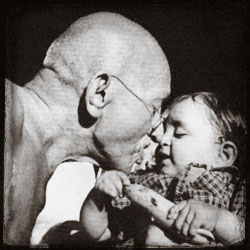 Gandhi taught tolerance and love for all people. Albert Einstein offered that “generations to come will scarce believe that such a one as this ever in flesh and blood walked the earth.”

Gandhi asked that his writings be cremated with his body. He wanted his life to be his message, not what he had written or said.

In the end, he believed that words are meaningless, and that our actions alone show our true priorities.

Or as he famously said: “You must become the change you wish to see in the world.”

WHAT TO DO NOW? Contemplate how you can apply Gandhi’s teachings to your life.

The Race to the Top…and the bottom
Burn Your Bridges