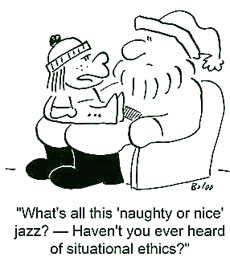 There is no room for “situational ethics” in business or in any area of your life for that matter. Something is either ethical or it isn’t. The situation does not matter.

If a person said, “Open the window but don’t open the window,” we would be at loss as to what to do; the command is contradictory and thus irrational.

In the same way, if our ethical principles and practices lack consistency, we, as rational people, will find ourselves at a loss as to what we ought to do and divided about how we ought to live.

Ethics requires consistency in the sense that our moral standards, actions, and values should not be contradictory. Examining our lives to uncover inconsistencies and then modifying our moral standards and behaviors so that they are consistent is an important part of moral development.

Where are we likely to uncover inconsistency or as what can be referred to as situational ethics?

First, our moral standards may be inconsistent with each other. We discover these inconsistencies by looking at situations in which our standards would require incompatible behaviors.

Then suppose that one day your employer insists that you work on a project that might cause harm to innocent people. The situation reveals an inconsistency between my moral standards. You can either obey my employer or you can avoid harming innocent people, but you cannot do both. 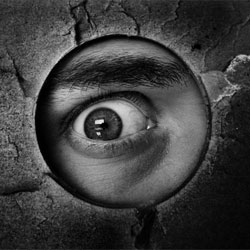 To be consistent, you must modify one or both of these standards by examining the reasons you have for accepting them and weighing these reasons to see which standard is more important and worth retaining and which is less important and in need of modification.

A more important kind of inconsistency is that which can emerge when we apply our moral standards to different situations.

To be consistent, we must apply the same moral standards to one situation that we apply to another unless we can show that the two situations differ in relevant ways.

You might believe, for example, that you have a right to buy a home in any neighborhood you wish, because you hold that people should be free to live wherever they choose.

Yet, you are among the first to oppose the sale of the house next door to a group of mentally handicapped persons.

But what is the difference between the two situations that justifies this difference in treatment?

What is the difference that makes it all right for you to buy a home in any neighborhood, but not them?

There is another sense in which the need for consistency enters into ethics.

We might hold consistent moral standards and apply them in consistent ways, but we may fail to be consistent in who we are as individuals.

We often use the word “integrity” to refer to people who act in ways that are consistent with their beliefs.

Here consistency means that a person’s actions are in harmony with his or her inner values.

Polonius, a character in Shakespeare’s Hamlet, points out–perhaps with some exaggeration–how critical such integrity is to the moral life when he says to his son, Laertes:

This above all: to thine own self be true,
And it must follow, as the night the day,
Thou canst not then be false to any man.

Consistency in our lives also implies an inner integrity. It may be the case that a person’s inner desires are allowed to conflict with each other.

For example, a desire to be courageous or honest may be contradicted by a desire to avoid the inconvenience or pain that courage or honesty often requires. Allowing such a conflict is self-defeating because these desires are contradictory. To achieve consistency, we must work to shape our desires to produce a kind of internal harmony.

So central is consistency to ethics that some moralists have held that it is the whole of ethics. They have argued that if people consistently treat all human beings the same, they will always act ethically.

Ethical behavior, they argue, is simply a matter of being consistent by extending to all persons the same respect and consideration that we claim for ourselves.

Religion, and I mean all religion seems to imply that ethics consists of nothing more than consistency with the words:

But is consistency all there is to ethics? We may be perfectly consistent with respect to our moral principles and values, yet our principles may be incorrect and our values misplaced.

We may even be consistent in treating others as we treat ourselves, but this kind of consistency would hardly be the mark of a moral life if we happen to treat ourselves poorly.

We might say that while consistency is surely not sufficient for ethics, it is at least necessary for ethics.

Ethics requires that there be consistency among our moral standards and in how we apply these standards.

Ethics also requires a consistency between our ethical standards and our actions, as well as among our inner desires.

WHAT TO DO NOW? Consider how you can apply this idea to your life and career.