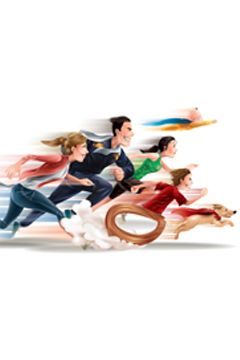 The goals that I strive to achieve with each post is challenging you and your paradigm in ways designed to accelerate your performance, grow your might and increase your overall win rate.

This particular message provides a prescient look at our impending future.

Ready? Let’s do this…

If PayPal co-founder Peter Thiel could do it all over, he said he would…Start thinking big sooner.

“If I could go back 20 or 25 years, I wish I would have known that there was no need to wait, I went to college. I went to law school. I worked in law and banking, though not for terribly long. But not until I started PayPal did I fully realize that you don’t have to wait to start something big.”

The self-made billionaire says you should take your 10-year life plan and ask…Why can’t I do this in six months?

I love these type of questions as you never know what you’re truly capable of until you’re challenged to think bigger and deliver faster.

Most of us are local and linear thinkers living in a global and exponential world.

Which means…our biggest individual challenge is to retrain our linear (one step at a time) brains and start projecting exponentially.

This isn’t easy… but it directly affects your ability to do big, bold and beautiful things with this ONE LIFE you’ve been given.

A CRASH COURSE IN EXPONENTIAL GROWTH

I hope you’re game for a crash course in what exponential growth actually looks like, and the radical power it can have.

Let’s begin with a fun experiment…

If you have a child or younger brother or sister, consider giving them the following choice:

Option #2: Offer them a penny on the first day, two cents on the second day…and tell them you’ll continue to double it each day for 30 days.

Chances are, they take the first option.

But if they took the second offer…what started out with a penny would result in $10 million on day 30.

Remember these numbers and how vital it is to recognize exponential growth.

THE LAW OF ACCELERATED RETURNS

We’re all familiar with the law of diminishing returns where at some point, no matter how hard you are working that your results will be less and less and you wind up playing a game of subtraction of even worse…division.

Google’s genius Futurist Ray Kurzweil has made headlines with his provocative yet often accurate predictions, like that a computer would beat a human in chess (already happened) or that self-driving cars would take us everywhere (starting to happen).

It states that “fundamental measures of information technology follow predictable and exponential trajectories.”

“The reality of information technology is it progresses exponentially, 30 steps linearly gets you to 30. One, two, three, four, step 30 you’re at 30. With exponential growth, it’s one, two, four, eight. Step 30, you’re at a billion.”

A simple assessment of the history of technology and its impact on growth shows that change is exponential.

I’d suggest you grab your helmet and buckle up…as we’re all in for one heck of a ride.

The truth is…most people and organizations are preparing themselves for a future that does not exist.

While technology is on an unconventional rocket ride from one moonshot to the next…far too many of us remain stuck in the past.

Most people operate with slow, flawed and severely outdated thinking and execution strategies which are only successful in creating small…and for some, even diminished returns.

A moments reflection will point out that we’re multiplying our capabilities as a civilization, and yet we still accept the highly-limiting beliefs that important societal change and progress, like re-engineering education, combating crime, innovating in government, medicine, law and even politics — must take generations.

Despite irrefutable proof of what we can accomplish in a short amount of time…most of us remain firmly fixed in the comfort zone and follow pre-prescribed paths.

In its simplest terms…The Law of Accelerating Returns states that technological change is exponential and that the rate of change acts much like compound interest.

It increases against the starting point at ever increasing rates…and it’s the reason why we are seeing such exponential, non-linear growth and rapid changes in technology.

To add further proof as to why you need to “GET THIS MESSAGE”…here’s a few other accelerating technology laws which validate my points.

Koomey’s Law states that the energy required for computation halves every 18 months.

Kryder’s Law states the amount of information we can store doubles for the same amount of space every 18 months.

Butter’s Law states the amount of data we can put through optic fibers doubles every nine months.

Nielsen’s Law states that bandwidth to the average home doubles every 21 months.

Sawnson’s Law states that the cost of solar panels drops 25% every doubling of manufacturing capacity.

Haitz’s Law states that the amount of light generated by an LED advances 20 times each decade and the price falls 90%.

LOOK CLOSELY…and you’ll see that they all share the same clear pattern of rapid growth.

It’s worth bringing to your attention that almost all of the consumer products you use are LEVERAGING a number of these technologies simultaneously.

What this means for you and I, as well as anyone interested in being competitive and relevant in the future is that technological change is accelerating so quickly… and the only viable strategy is to change our way of thinking about achieving rapid success…and upgrading our execution strategies.

Life is way too short to operate with self-limiting beliefs and faulty execution strategies.

It’s for those reasons why you’ll want to participate in this new masterclass and learn what it takes to compete and win in today’s competitive world.

Dare Mighty Things
What You Do…Is Who You Are