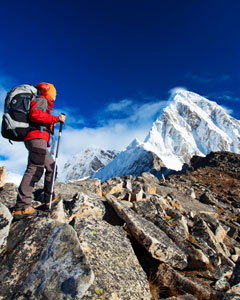 They’re the three most famous words in mountaineering.

When asked by the New York Times in 1924 why he wanted to climb Mount Everest, George Mallory responded:

That means no ropes. No safety gear. No net.

That’s not only amazing, it’s seemingly superhuman. Not just the skill, but the sheer courage and audacity to even attempt it. Achievements like this inspire awe. But really, it’s just like any other goal.

The 31-year-old climber trained rigorously for over a year, and knew every move up El Capitan cold.

When he made the ascent, he said he felt “energetic and fresh” because he didn’t have to drag 60 meters of rope behind him. Interestingly, the thing that made the climb dangerous also made it feel easier.

I have no plans to start rock climbing, especially without a rope. But I see Alex Honnold as an inspiration to any of us who are in pursuit of our own personal goals…and especially a strong finish to the year.

Here’s what he had to say about his achievement:

Do you have to risk your life to live your best life? Absolutely not.

But you do have to challenge yourself, you do have passionately pursue your goals in order to achieve life satisfaction and happiness.

That’s why your going to want to participate in the 100 Day Finish Strong Challenge when we open for enrollment on September 22nd as that begins the final 100 day countdown of the year.

So, what’s your next personal Everest (or El Capitan)?

What do you want to accomplish in pursuit of living your best life?

In other words, what will help you become the best version of you?

Not because someone else expects it. Not because of money, awards, or recognition.

Just because it’s there.

Limit Your Unforced Errors
Finish Strong I Leave Nothing