Mark Johnson is the producer of a remarkable documentary about the simple but transformative power of music: Playing for Change: Peace Through Music.

Playing for Change is a movement uniting people all over the world through music and inspiration. I absolutely love their mission and commitment to inspiring peace through music.

The film is unbelievably special and brings together musicians from around the world — blues singers in a waterlogged New Orleans, chamber groups in Moscow, a South African choir — to collaborate on songs familiar and new, in the effort to foster a new, greater understanding of our commonality.

Mark has also been instrumental in creating The Playing for Change Foundation which provides resources (facilities, supplies, educational programs, etc) to musicians and communities around the world.

Check out this compilation on the song: Stand By Me

The foundation is working with South African poet Lesego Rampolokenga to build the Mehlo Arts Center in Johannesburg, South Africa and building and supporting the Ntonga Music School in the South African township of Guguletu. In addition, Playing For Change is working to enhance and rebuild Tibetan refugee centers in Dharamasala, India and Kathmandu, Nepal. 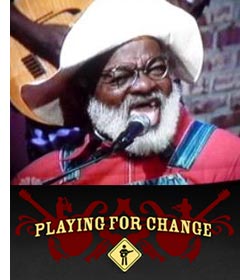 Musicians around the world Playing for Change.

According to Mark, “The vision of PLAYING FOR CHANGE extends far beyond just music and film. We have established the Playing For Change Foundation to build music and art schools for kids around the world. We have recently returned from Gugulethu, South Africa where we constructed the first Playing For Change Music School. We plan to build many more schools, each equipped with cameras and a recording studio so supporters all over the world can watch recitals and performances in the schools we are building together. We can use these schools as sources of inspiration and a means of breaking down negative stereotypes among people everywhere.”

In the words of one of the artists featured in PLAYING FOR CHANGE, Vusi Mahlasela, “The world is immigrating into a global village, the question is how much do you want to belong.”

Learn more about Playing for Change, their mission, and how they are inspiring people throughout the world to accomplish much more together than we ever can apart.