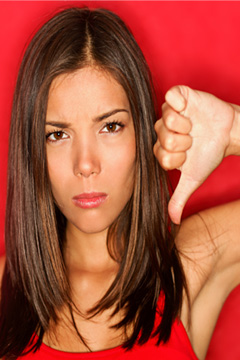 Introduced on March 14, 1950…the FBI Ten Most Wanted Fugitives List was the brainchild of then FBI Director, J Edgar Hoover.

The goal was simple…in hopes that publicity and public awareness would lead to arrests, the FBI listed the names of ten fugitives it considered to be the most potentially dangerous…the ones whose criminal behavior made them a true menace to society.

You may be wondering…“what does the FBI Most Wanted this have to do with you and your performance?”

While criminals are not one of my marketing demographics…I do want to use this message to focus on criminal behavior, more specifically on certain aspects of behavior, and why these unwanted, menacing behaviors need to be locked up and put away.

Let’s first define what I mean by criminal behavior…and identify the behaviors that make this undignified list possible.

Criminal behavior is as any act that violates forward progress, undermines self-esteem, compromises your reputation and character, decreases your earning ability and which negatively impacts your relationships, your future, your quality of life and overall peace of mind.

A moment’s reflection will validate this argument…

If the goal is to live a life of excellence, to unleash your greatness and to consistently move the needle forward…then it’s absolutely criminal to do anything less than your best.

It really is a criminal act to dishonor commitments, to be late and unprepared, to not follow through and to say one thing and do another.

Lying is deliberate and calculated deception.

Greed is a repulsive bottomless pit of selfishness.

Debt and over-spending imprison, enslave and extort your peace of mind and future growth.

Gossip is an emotional cancer that is practiced by the weak and which preys on others misfortune.

Apathy, procrastination and laziness are all forms of behavioral rot which only succeed in creating bad luck.

Narcissism, selfies and an obsession with social media traps people in a desperate, shallow pit of self-importance and low self-esteem.

Excuses are nothing more than reasons for failure and lame attempts at justifying under-performance.

Negativity and sarcasm are pathetic behaviors used by pathetic people to steal happiness and joy.

Resistance to change is a choice that sentences you to a dark future of obsolescence, irrelevancy and failure.

Neglect is the act of failure. It is not caring for or paying attention to something or someone.

And, when you neglect or simply demonstrate indifference to your health, money, personal development, etiquette and relationships…they quickly begin to deteriorate.

They take on the look and feel of a shabby, run-down, dilapidated building on the bad side of town.

For those who are tempted to justify neglect or who like to think that they can talk their way of criminal behavior….heed these words:

I have a very simple philosophy on life and success. You shouldn’t steal from yourself…yet that is exactly what we are all guilty of doing when we engage in unhealthy behavior.

If you’re going to commit your life to excellence, wealth creation, the security and financial well-being of your family…and if other people to include your staff, your team, your spouse and children are going to commit their lives to you, you owe it to yourself and to everyone to get the highest, best and most consistent results.

This can only be achieved by behavioral excellence…in other words on being on your best behavior at all times.

Do Not Conform
Speed Is Sexy