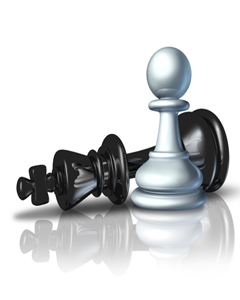 If the goal does not challenge you, it cannot change you.

If the only goals we set are easy, fun and convenient there will be no growth, no great reward and certainly nothing worth bragging about.

That’s precisely why you need to take on your Goliath and slay it.

And, the bigger your Goliath, the more powerful, confident and capable you become by conquering it.

The phrase “David vs. Goliath” denotes an underdog situation, a contest where a smaller, weaker opponent faces a much bigger, stronger adversary or challenge and wins.

However the real significance of that story lies in the HOW…as in, how was David able to beat the mighty giant named Goliath?

David was incapable of meeting Goliath’s strength and power, but he was capable of outfoxing him….and he did that by adapting to the situation and deploying an unconventional strategy.

A simple sling and a stone thrown to the sweet spot of the forehead…a new technology was what brought down Goliath.

His ability to rise to the challenge and adapt to this change in weaponry and strategy proves that adaptability beats strength when strength does not adapt.

Perhaps this is a lesson you need to learn as well…as it’s not conquering the simple and easy that pushes us to new levels…and it’s certainly not overcoming the small that inspires greatness in others.

It’s about slaying the Goliaths in our life…taking on and conquering the giants.

Confronting and overcoming our fears.

Redeeming ourselves by rising from our failures.

Staging a comeback and silencing our critics.

Breaking through our psychological brick walls.

And beating the odds.

That’s what changes us and turns us into a far more capable and powerful human being.

That’s what inspires your friends, family and colleagues to step up their game to do likewise.

You were built for confronting and overcoming challenges and adversity. It’s in your DNA as much as it’s in the DNA of a shark or an eagle or a lion.

You were made for tough times…to endure…to fight for what you want…and slaying your Goliath is the key to unleashing your greatness.

So, grab your slingshot, strengthen your resolve…and slay what stands in your way.

Just like David who took on the mighty Goliath and won…you are stronger, smarter and far more adaptable than any of the giants that stand before you.

Everything you want in life will be found by rising to great challenge and slaying your Goliath.

You can. You will. You must.

And that’s why you’re going to love the 100 Day Challenge as you’ll learn everything you need to compete at the highest level and slay every Goliath in your path.

P.S. Click here to get your copy of the ultimate guide to unleashing your greatness and slaying your goliath.